Cryptomator, a client-side encryption tool for cloud files (and more), has been updated recently with experimental FUSE support on Windows (via WinFSP), KWallet support, vault statistics, and more.

Cryptomator is a free and open source Java tool that provides client-side encryption for your cloud storage files, available for Windows, Mac and Linux. There are also iOS and Android applications – these are open core (a business model for the monetization of commercially produced open-source software), and need to be purchased.

It works with cloud storage services that synchronize with a local directory, like Dropbox, OneDrive (on Linux using e.g. OneDrive Free Client fork) and Google Drive (including using it with Insync). You can choose to either encrypt your whole cloud storage, or only a few sensitive files, in either a single or multiple vaults.

It’s worth mentioning that while Cryptomator was created with cloud storage encryption in mind, it can also be used to encrypt a folder on your system or some external drive.

Cryptomator was updated to version 1.5.9, then to 1.5.10 as a hotfix, and it includes some important changes. This release brings experimental FUSE support on Windows (previously it supported WebDAV, FUSE on Linux and macOS, and Dokany on Windows). This feature should only be used for testing right now, and to try it you need to have WinFSP installed and, according to this pull request, to run Cryptomator with the -Dfuse.experimental="true" flag on startup.

The latest Cryptomator also brings a new Linux-specific feature: integration with KWallet (KDE Wallet), so you can save the password there for easy access.

Related: How To Encrypt Cloud Storage Files With Rclone

Also, with this release, vault statistics are back (this was removed with the UI revamp in version 1.5.). Unlock a vault and you’ll see a small Vault Statistics box in the bottom right-hand side of the application window. Click it to see more statistics: 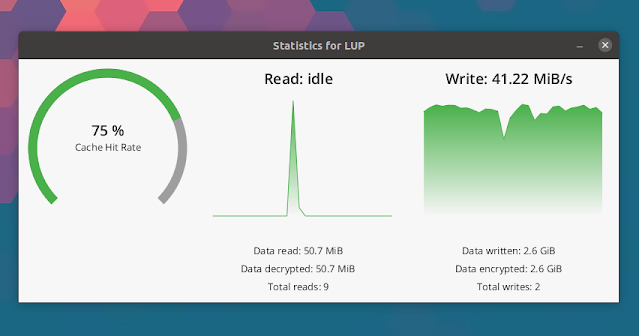 Related: How To Mount BitLocker-Encrypted Windows Partitions On Linux

On the downloads page there are Cryptomator binaries for Linux, Microsoft Windows and macOS. The source is available on GitHub. The Cryptomator download page also has links to the Android and iOS app store, but the mobile apps are not free!

On Linux, Cryptomator is offered as a generic AppImage binary that should run on any Linux distribution. To run it, make the .AppImage file executable (either from a terminal using chmod +x cryptomator-1.5.10-x86_64.AppImage, or using your file manager, from the file properties), then double-click the AppImage to run it.

There’s also a PPA (which oddly packages the AppImage, the differences being that you’ll get automatic updates and an application menu entry for Cryptomator) for Ubuntu and Ubuntu-based Linux distributions (Linux Mint, Pop!_OS, Elementary OS, Zorin OS, etc.) and an Arch Linux AUR package available.

Related: How To Encrypt An USB Drive With VeraCrypt (Compatible With Windows, macOS and Linux)

Oracle VirtualBox is my go to solution to efficiently and quickly test different Linux and Unix operating systems. It is one of the easiest...
Read more
Linux

In this article, we will cover creating a branch, tag, renaming the branch, and revert the commits on Git. If you are new to...
Read more
Linux

Raspberry Pi Pico released and available at $4 only

Last year, the Raspberry Foundation also released a brand new version of the Raspberry PI PC (personal computer), and it is directly built into...
Read more