Chetanhttps://thcb.in
Cover Thumbnailer is a tool to get Nautilus, Nemo, Caja and Thunar file managers to show folder thumbnails for music and image folders.

For music folders (needs to have cover.jpg/png inside the folder), the application lets you choose the thumbnail resize method (crop or preserve), and if to allow mosaic or not. For the pictures folder, you can choose the maximum number of pictures to show on the thumbnail. Besides the default Pictures and Music folders, you can add extra folders, and ignore folders if you wish.

With this release, Cover Thumbnailer actually works better with Thunar and Caja than with Nautilus. That’s because Nautilus now sandboxes thumbnails, which prevents Cover Thumbnailer to work out of the box with this file manager. 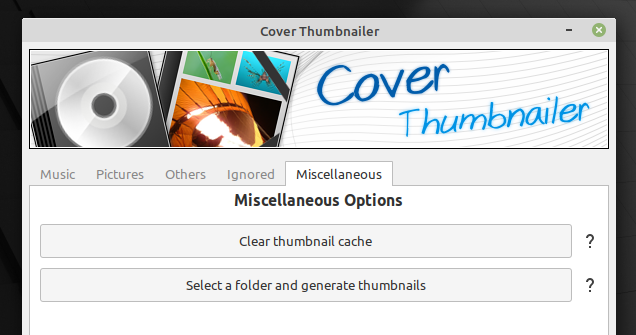 To use this with Nautilus, you now have to open the GUI, go to the Miscellaneous tab, and click “Select a folder and generate thumbnails”. As a result, the thumbnails in Nautilus will not be automatically regenerated when a folder’s content changes, and you need to click this button when you want to update them.

It’s worth noting that the thumbnail generation is slow using Cover Thumbnailer. Also, some folders may not have their thumbnails generated sometimes (in my time using this, I noticed that a newly created folder in which I then copy some images doesn’t get a thumbnail initially) – in such cases, you can restart the file manager (e.g. thunar -q or caja -q) or clear the thumbnail cache from the Cover Thumbnailer GUI.

Another tool by the same developer (Flozz) is Nautilus Terminal, a terminal embedded in Nautilus. Check it out here.

How to install Cover Thumbnailer

Install these as follows:

Fix missing ~/.cache/thumbnails/normal folder missing (I noticed that this folder was missing on Manjaro, causing the thumbnail generation to fail):

For Nautilus the thumbnail generation is not automatic – you’ll need to go to the Miscellaneous tab and click Select a folder and generate thumbnails. For Caja or Thunar file manager, thumbnail generation should be automatic, including the Music and Pictures folders by default, but you can also add other folders in the Cover Thumbnailer GUI (launch it from the applications menu).

In case the thumbnails don’t show up, try to restart the file manager:

How to uninstall Cover Thumbnailer

Want to uninstall Cover Thumbnailer? Use this command:

To revert the folder thumbnails to their original look, remove the ~/.cache/thumbnails/normal folder:

How to Install R on Debian 10 – Linux Hint

As you know, Red Hat recently announced that CentOS Linux 8, as a rebuild of RHEL 8, will end in 2021. CentOS Stream continues...
Read more
Linux

How To Find IP Address In Linux

This guide will walk you through the steps to check or find IP address in Linux using ip and hostname commands from command line...
Read more