Screenkey is a tool that shows keystrokes on the screen, great if you’re recording screencasts, video reviews or demos.

For those not familiar with Screenkey, here’s a quick rundown of its features:

The application was updated recently to version 1.0, which adds support for Python 3 and GTK 3 (I actually contributed a small patch that gets its AppIndicator to work with Python 3). This is the first release in 4 years, and it only supports X11 for now – a bug is open for Wayland support so you can track that if you want to see when this is resolved.

The Screenkey package in Ubuntu 20.04 and Debian Bullseye / Sid was actually updated by a Debian maintainer to support Python 3 and GTK 3, but the port wasn’t finished (the AppIndicator didn’t work for example). 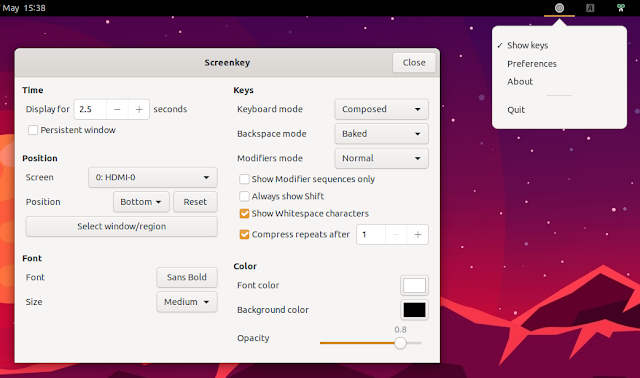 Other changes in Screenkey 1.0 include:

Using Screenkey is as traightforward as it gets. Launch it, start typing, and the keys you press will be shown at the bottom of the screen.

Toggle Screenkey on / off by pressing one of the following: both Ctrl keys, both Shift keys or both Alt keys at the same time. You may also pause Screenkey by clicking on Show keys menu item from its AppIndicator / tray.

If you want to change the Screenkey text overlay position to something like top, center or fixed, or select a window / region to which the Screenkey overlay should be attached to, open its Preferences from the tray / AppIndicator menu, and check out its position settings. From there you can also change the font face and size, colors, keyboard mode, modifiers mode, and so on.

This is a short video demo of Screenkey I recorded so you can see how it works in real time, and not just in a screenshot:

It’s important to note that Screenkey itself doesn’t record your desktop screen. Use it in conjunction with a screen recorder. I recommend checking out 4 Tools To Record Your Linux Desktop (Screencast) In 2020.

How to install the latest Screenkey

While the latest Screenkey has not yet been packaged for most Linux distributions, it’s easy to install it from source.

When installed from source, Screenkey may not show up in the applications menu on some desktop environments, in which case you need to logout / relogin. Also, if you use GNOME Shell you’ll need to install the AppIndicator support extension (this is installed by default on Ubuntu, but not on Fedora for example).

Remember that Screenkey only works on X11. If you use Wayland and want to use Screenkey (e.g. Fedora Workstation with GNOME uses Wayland by default), logout and choose an X11 session from the login screen.

I also want to add that Atareao has an Ubuntu PPA about which they’ve posted recently, which has Screenkey with fixed AppIndicator for Ubuntu 20.04, so you can use that if you don’t want to install it from source.

How to Install AppImage in Linux

AppImage is a self-contained format for packaging applications. It is the universal software package format compatible with various Linux distribution. In the traditional system...
Read more
Linux

A Static IP address is a 32-bit identification address of your network that never changes where the dynamic IP address changes frequently. Establishing a...
Read more