How to Record Video in PAL Format in iPhone

iPhones have pretty much the best video capabilities of any smartphone out there. This is why, while I don’t often use my iPhone for clicking pictures, I do use it for shooting videos a lot. However, while iPhones support frame rates such as 24, 30, and 60 FPS for videos, none of those are good for shooting in countries like India under artificial lighting. Fortunately, you can now record videos in PAL format on iPhones, which fixes this exact problem. So, here is how to record video in PAL format with iOS 14.3.

Record Video in PAL Format in iOS 14.3 on iPhone

In this article, we will first discuss the PAL format. We will tell you what it is and why you would want to use this format. If you already know that stuff, you can use the table of content below to jump directly to the tutorial.

What is PAL Format in Videos?

First things first, you may be wondering what the PAL format even means. Well, PAL stands for Phase Alternating Line, and it’s a broadcast standard used in many countries in Europe and Asia, including in India. On the other hand, there are other formats as well, such as NTSC that’s used in countries like the USA, and SECAM that’s used in a bunch of countries as well.

Why Would You Want to Shoot in PAL?

Without getting too deep into details about frame rates and electrical grids, let me explain the basic reason behind wanting to shoot PAL videos. If you’re in the US and shooting a video on your iPhone, you’ll probably be shooting in 30 or 60fps. That works perfectly because the electrical grid in the US has a frequency of 60Hz. You probably read about this in school as well, remember?

In India, however, the electrical grid has a frequency of 50Hz. That means, if you shoot a video in artificial light at 60fps or even 30fps, you will notice flickering around the light sources. That’s because the video is recording 60 frames a second, while the AC current in the light source is alternating at 50 times a second. That doesn’t match, and it results in weird flickering issues.

With support for PAL formats in iPhone, you get access to recording videos at 25 fps. When shooting video at 25 fps, you will not notice any flickering with 50Hz light sources anymore. So, you can shoot better videos in artificial lighting.

If you’re unable to understand what I’m talking about, take a look at the videos below showing the same light source being recorded at 1080p60 and 1080p25 on my iPhone XR.

How to Record Videos in PAL Format in iPhone 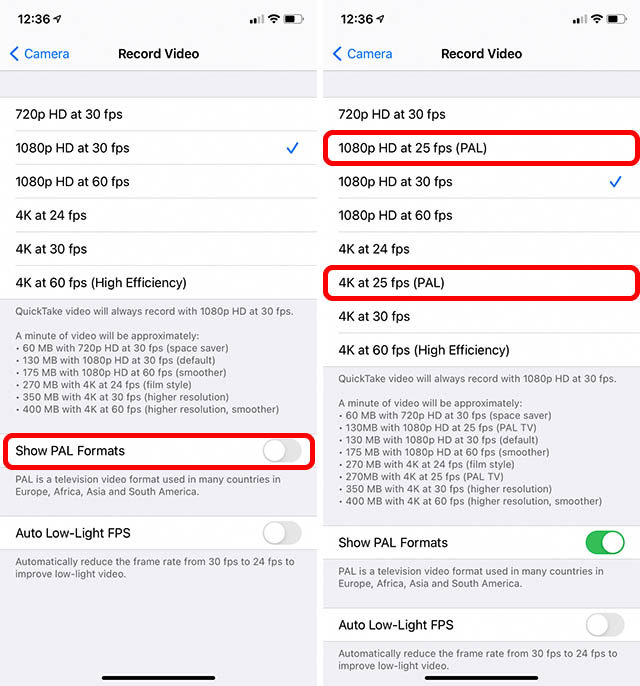 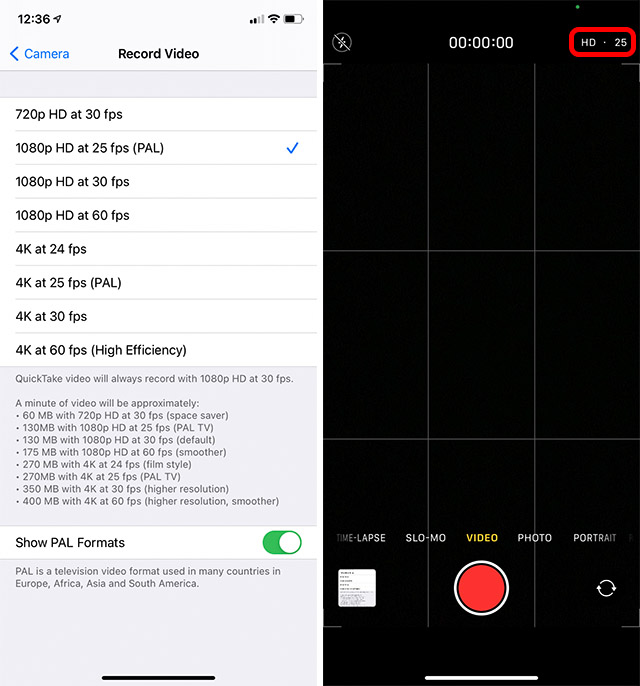 Record PAL Videos with Ease on Your iPhone

Adding support for the PAL format is awesome for everyone living in countries that have 50Hz grids. Moreover, it’s useful for every one else as well, for when they go on a vacation to a country with PAL standard. With PAL support on iPhone, your vacation videos will not have lights flickering in them anymore, which is obviously an improvement. So, are you going to start using PAL formats on your iPhone for recording videos? Let us know in the comments.