How to Remove Specific Featured Image from Photos Widget

Home screen widgets are a nice addition to iOS 14. Slowly but steadily, Apple has started to show a keen interest in offering customization to users. Among a handful of widgets, Photos widget is one of my top picks. It uses artificial intelligence to rotate images to show you your favorite memories. It’s an unobtrusive way to relive your memories. But what if you don’t appreciate some featured images shown in the home screen? Well, you can easily remove specific featured images from Photos widget in iOS 14 and iPadOS 14, ensuring unwanted shots don’t spoil your day!

As of now, iOS 14 doesn’t offer a way to control what images the Photos widget should and shouldn’t show. So, if you don’t like some images that pop up on the widget, you are left with no option but stop it from appearing in the featured section.

Hopefully, Apple will allow users to create and select albums to show in the widget, so we have more control over what photos show up. Until then, use this method to get rid of unwanted photos.

1. Navigate to the Home Screen on your iPhone and iPad. Then, tap on the image displayed in the Photos widget.

Note: To add the widget, long-press the Home Screen and then tap on the “+” button at the top left corner of the screen. Then, find the Photos widget -> Choose the size and add it.

2. Now, you will be taken into the Photos app. Next, tap on the share button.

3. Next up, tap on the Remove from Featured Photos option in the Share Sheet. 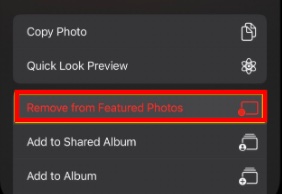 Stop Certain Featured Images from Showing Up in Photos Widget

iOS 14 boasts a series of eye-catching features including App Library, back tap feature, limit third-party access to Photos. What do you think of these all-new features and which one of them has impressed you? Do not forget to share your thoughts about them.