How to Restart Network on Ubuntu 20.04 – Linux Hint

In this section, I’ll be assuming that you’re using Ubuntu 20.04 with the default GNOME desktop.

Restart network from the desktop

Click on the top-right network icon on the screen.

To enable it again, go through the same process. This time, there’ll be a different option “Connect”. Click “Connect” to re-establish the network connection.

You can also do this directly from the GNOME “Settings”.

From the left panel, select “Network”. 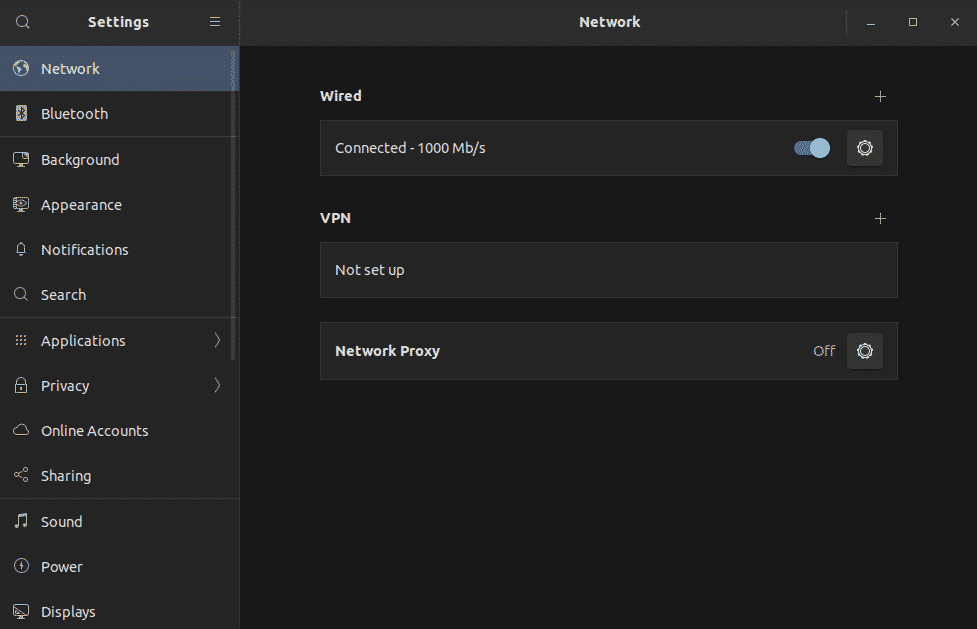 Disable and enable the connected network(s).

When working with the CLI, there are multiple ways of taking action. We can take action on the network manager service or use other tools like nmcli, ifup, nmtui, etc.

This is one of the easiest ways of restarting the network service. It’s equivalent to the graphical method demonstrated above.

Fire up a terminal and run the following command.

Systemd offers an array of system components to the system. Part of it is handling the services. The previous method is only an alternative one of this method. Systemd is directly told to restart the service rather than going through any hoops.

The nmcli tool is a powerful tool for managing the network connection on Linux machines. It’s a popular one among system admins because of its ease of use.

First, turn off the network connection.

Then, turn it back on.

The ifup and ifdown commands come with the ifupdown package. By default, it doesn’t come with Ubuntu. Thankfully, it’s directly available from the official Ubuntu repo. Install them right away.

Once the installation is complete, perform the network restart.

It’s a good practice to combine both commands in a single line.

The nmtui tool is yet another network management tool that’s widely popular among system admins. Unlike the other CLI tools, it offers an interactive way of managing network connections that’s similar to the GUI method.

To navigate the tool, use the arrow keys. Select “Activate a connection”.

You’ll land on a screen with a list with all the network connections. Select the appropriate one and select “Deactivate”.

Once deactivated, activate the connection.

The network has been successfully restarted. Quit the application.

In my case, the target network interface is enp0s3. Let’s restart the network.

Restarting the network is a common solution to various network-related problems. If it didn’t yet solve the issue, then the next recommended action is restarting the system. If the problem persists, then it’s worth investigating further.