pulseaudio-dlna is a streaming server which allows streaming audio from your Linux computer to a Chromecast or DLNA / UPNP device in the same network, via PulseAudio.

This article explains how to install and get pulseaudio-dlna to stream audio from Ubuntu 20.10, Pop_OS! 20.10, and other Linux distributions based on this Ubuntu release, to Chromecast devices.

The last pulseaudio-dlna release uses Python 2, which is no longer available in many Linux distributions, which means it can no longer be used on modern Linux distributions. There is, however, a Python 3 branch that you can use, but that too is unmaintained for some time, and it has some issues, for example it’s not compatible with the latest pychromecast 7.* (which is what Ubuntu 20.10 has in its repositories).

Ubuntu 20.10 (and Linux distributions based on it, like Pop!_OS 20.10) does have pulseaudio-dlna in its repositories, but this package does not work properly, at least not with Chromecast devices (I can’t test it with DLNA devices – it might work with those). And since Ubuntu 20.10 has pychromecast 7 in its repositories, that complicates things a bit if you want to use the Python 3 branch.

But I got it to work, and this article explains everything to get pulseaudio-dlna to work in Ubuntu 20.10 / Pop!_OS 20.10 with Chromecast devices (it should also work with DLNA devices but like I said, I did not try it).

It’s worth noting that Ubuntu 20.04 does not have pulseaudio-dlna in its repositories, and using the same Python 3 branch doesn’t work on this Ubuntu version.

Also, I didn’t add instructions for other Linux distributions because this doesn’t seem to work in a virtual machine (even though it’s in the same network), so I couldn’t test it properly. There are third-party packages for Fedora and Arch Linux (which use the same Python 3 branch and patch used in the instructions below), among others, so if you use those Linux distributions you can give those packages a try.

1. Install the pulseaudio-dlna Python 3 dependencies (minus pychromecast, that’s in step):

2. Remove python3-pychromecast and pulseaudio-dlna if you had them installed from the Ubuntu repositories:

The pulseaudio-dlna Python 3 branch does not work with pychromecast 7, which is available in the Ubuntu 20.10 repositories. So we’ll have to install pychromecast 6 instead.

To make it easier to install, I’ve uploaded a python3-pychromecast 6.0.1 DEB here. Download and install that package on your Ubuntu 20.10 / Pop!_OS 20.10 machine. You can also install it in some other way if you wish.

You’ll also need “hold” this python3-pychromecast package version, so it’s not upgraded. This can be done using the following command:

In case you later want to upgrade this package, use the same command but with “unhold” instead of “hold”.

For the installation instructions below we’ll use wget and git, so make sure they are installed:

Now you can clone the pulseaudio-dlna Python 3 branch, patch it with a fix to wait for the Chromecast device to be ready, and install it:

To launch pulseaudio-dlna, open a terminal and type: 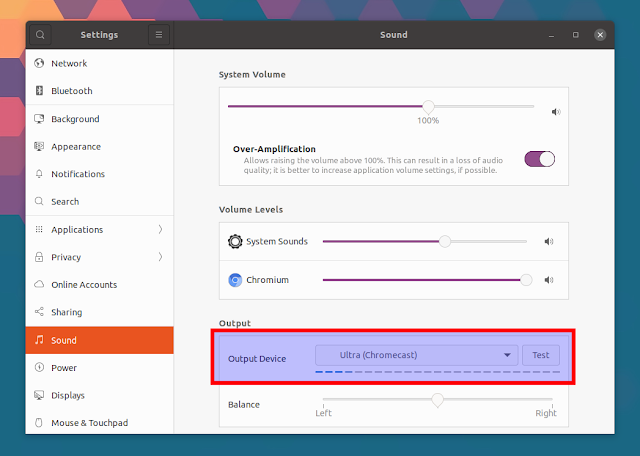 It’s important to note that pulseaudio-dlna has quite a bit of lag, so it may take a while until the sound starts on your Chromecast / DLNA device.

This streams all the sounds from your computer to the remote device. In case you want to stream the sound from a particular application only, install pavucontrol:

Then launch pavucontrol (either by typing pavucontrol in a terminal, or launching PulseAudio Volume Control from the applications menu), and on the playback tab you can change the stream individually, for each application. 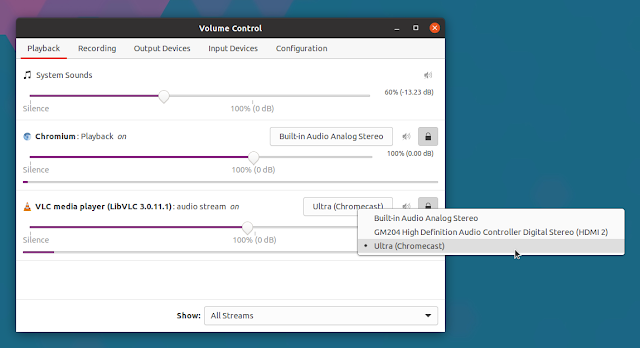 For example, in the screenshot above, VLC is set to stream to my Chromecast while Chromium does not.

pulseaudio-dlna has quite a few options. For example, you can get it to use a different port (it uses port 8080 by default), like this:

Where PORT is the port you want to use for pulseaudio-dlna.

You can also specify the codec to use:

You can also specify a different encoder backend (by default it uses a generic encoder), like ffmpeg, by running pulseaudio-dlna like this:

In case more than 1 device is discovered, you can specify which one to use using:

For more options, check out the application help:

You might also like: How To Enable Echo / Noise Cancellation Of Microphone Input On Your Linux Desktop (PulseAudio)