Samsung is back with a new offering and it seems that this time around, the brand decided to take down major phones in the Rs 25,000 segment. With the latest Samsung Galaxy M51, the company has taken a bold step by adding a whopping 7,000mAh battery under the hood. While several brands are being most competitive about offering a powerful SoC, Samsung chose to do something different to woo customers. Also Read – Samsung Exynos 1000 may outperform Qualcomm’s Snapdragon 875 SoC

It has also thrown in all the other features that matter to a customer. The South Korean giant has ditched its in-house Exynos SoC and opted for a Snapdragon 700 series chipset. The Samsung Galaxy M51 comes at a time when the base 6GB RAM + 64GB storage model of OnePlus Nord will finally be available for Rs 24,999 on September 21. But, Samsung is giving you 128GB storage in the same price range. This is not it and you get a lot of other features too, so keep reading our Samsung Galaxy M51 review to find out whether it is worth your money. Also Read – Galaxy S21 would use the ISOCELL Vizion sensor, Samsung’s own LiDAR

The Samsung Galaxy M51 doesn’t boast of a very elegant design, but is surely attractive. In fact, it looks very similar to the Galaxy M31s. The only difference here is you don’t get a gradient paint job with the new one. It shouldn’t matter to many as a lot of people are anyways going to use a back case to protect the device from any scratches or damage. The back panel is glossy and can easily slip away from your hands. So, using a case would be a wiser decision. The company doesn’t ship a plastic cover with the box, so you will have to buy one separately. Also Read – The Camera-centric Samsung Galaxy F41 is Coming Soon

The mid-range phone is also a bit heavy, but you will get used to it with time. However, it is worth noting that the phone’s case could add a little more weight. The Samsung Galaxy M51 doesn’t have a very slim profile either. What I loved about the device is its display. If you own a Samsung phone, then you are quite aware that you are getting the best display. The color reproduction is just great and the punchy FHD+ AMOLED panel just makes you stare at it all day. You get a punch-hole display design and the cut-out is placed at the center of the screen on the top side.

The side bezels are quite thin, and the chin also seems much smaller than the competition. The screen measures 6.7 inches, which is huge. It has the usual 20:9 aspect ratio. While the big screen gives a delightful experience, the compact display that the Samsung Galaxy S10e has was perfect and offered the best experience for one-hand usage and carrying around. But times have changed and if people want a good big screen for media consumption, then they will have to live with the difficulty of reaching the top of the display and one-hand usage. We will talk about this more in the software part. The panel is protected by Corning Gorilla Glass 3 protection, and it is visible in harsh sunlight too.

Unlike the OnePlus Nord, here you do get a headphone jack. So, if you have a pair of wired-earphones, cheer up. Samsung has embedded the fingerprint scanner into the power button. This is a better implementation than adding it to the rear panel and the back now looks clean with only the rectangular camera module. The fingerprint scanner is positioned well, but reaching the volume buttons is a bit hard as it is placed above the power button.

The handset draws its power from a Snapdragon 730G SoC, which is a capable chip and can deliver good enough performance to keep the show running. The same chip is also powering the Realme XT smartphone. We didn’t witness any issues while using the phone for about two weeks. Though, we had problems when the camera app abruptly stopped working. This happened a few times and we had to close it and then re-launch it. The multitasking experience was fast and most of the apps loaded quickly. Heavy titles ran fine and the back of the phone did get a bit warm after gaming for hours.

The Samsung Galaxy M51 ships with OneUI Core 2.1, which is based on Android 10. If you have used the Samsung phones, you are well aware that One UI 2 is optimized for one-hand usage, and the key UI elements are within thumb’s reach. So, you don’t have to worry about the big-screen issue here. Though not enabled by default, there is a Swipe down for notification panel option.

This feature lets you quickly access the notification panel and shortcuts by swiping down anywhere on the screen. You can enable the feature in the home settings. Apart from this, you also get the Always-On Display (AOD), Dual Messenger, Panic mode, Nearby Share feature, and a lot of other customization options for a better experience. But, at the same time, you also get bloatware. Thankfully, you get an option to uninstall the apps, but you can’t remove Samsung apps. The Samsung Galaxy M51 has four cameras at the back. The setup includes a 64-megapixel primary camera with an f/1.8 aperture and a 12-megapixel ultra-wide-angle camera with a 123-degree field of view. There is also a 5-megapixel macro camera and a 5-megapixel sensor for depth sensing. For capturing selfies, you get a 32-megapixel camera on the front. Both the front and rear camera setup are similar to the budget Samsung Galaxy M31s smartphone. Check out the camera samples of the device in the album below. 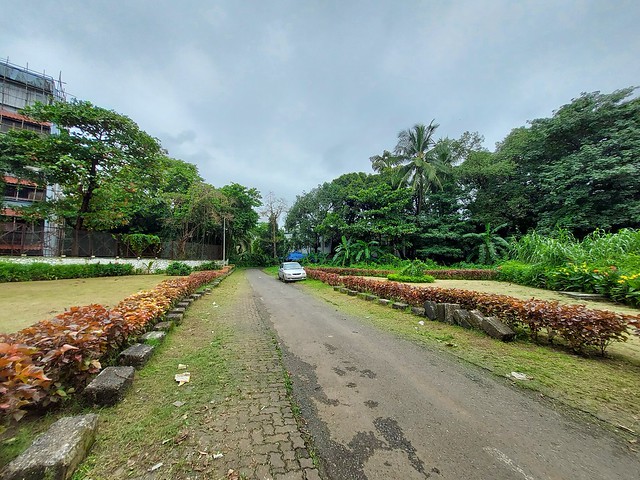 The shots taken with the device are by default saved in 16-megapixel resolution. You do get the option to capture photos at the 64-megapixel resolution, but it is hidden in the aspect ratio settings. In daylight, the Samsung Galaxy M51 offered us decent images with enough details. But, the photos lack sharpness and the dynamic range is not that great. Some of the shots did turn out well because of HDR and scene optimizer mode. But, the colors in most scenes are a bit saturated, giving an artificial look. The same was also the case with close up shots. However, the clarity, sharpness, and details that the device captured impressed me.

There is a Live Focus mode, which lets you take portraits shots. Once you capture the shot, if you immediately check the image, you will see the image optimization in progress. This happens indoors, but we liked the raw shot. This is for both selfies and portraits. However, outdoor shots are good and the edge detection is quite nice in both cases. The best part about Samsung phones is that you can adjust the level of blur before or after taking an image.

You also get a few filters in the camera app, and you can also adjust the intensity. The low light performance is good enough and seems better than a few phone rivals in its range. You will get better shots with night mode in comparison to the regular mode. The night mode retains colors and details well. You also get this for clicking wide-angle camera shots with decent output.

The most interesting part about the device is its 7,000mAh battery. With light to moderate usage, we got full two days of battery which is great for heavy users. But, if you are playing games and watching movies for hours, taking photos, you will get close to one and a half days of battery life. Do note that you will get results based on your light or heavy usage. The company ships with a 25W charger. As per our test, the charge will take around two hours to top the device from zero to 100 percent. Samsung Galaxy M51: Should you buy it?

The South Korean giant has managed to create a good buzz around its new product for all the right reasons. The Samsung Galaxy M51 is a great deal for those who crave for very long battery life and hate charging their phone. The company has stuffed in a monstrous 7,000mAh battery, and you won’t be disappointed in other aspects too. So what else makes this for a good option? You get a huge AMOLED panel with great color reproduction, 128GB storage, and decent overall performance. The Samsung Galaxy M51 is priced at 24,999 in India and can be purchase via Samsung’s India online store and Amazon. Currently, it is one of the best phones under Rs 25,000. Alternatively, you can check out the OnePlus Nord or Realme X3 phones in this price range.