Poco X3 is scheduled to arrive on 7th September next week. The company has slowly been teasing the key features of Poco X3, including the 64MP quad-camera and 33W fast-charging over the past week or two. But now, we can move past all of it behind as an unboxing and hands-on video for the Poco X3 has surfaced online. It revealed not only the design but everything there is to know about the upcoming mid-range phone.

The YouTube video, which has since been taken down, was uploaded by the Spanish creator Tecvideos TV earlier this morning. It shows off the Poco X3’s box in all of its black and yellow glory, along with the device.

We can’t attach the video for you now but here’s a couple of screenshots from the said video. As you can see below, Poco X3 resembles the Poco M2 Pro from the front. It will include a center punch-hole cutout in a 6.67-inch Full-HD+ (2400 x 1080) IPS LCD panel with a 120Hz refresh rate. The punch-hole cutout is said to house a 20MP selfie snapper, as per the YouTuber.

Poco X3 seems to be the first smartphone from the Chinese giant that won’t simply be a Redmi rebrand. The rear panel includes a gray gradient finish with a huge Poco logo and a monstrous quad-camera cutout. The video revealed that the device will launch with a 64MP (f/1.79) primary sensor and only support up to 4K @ 30 FPS video recording. The function of the rest of the camera sensors is still unknown.

The video also goes on to confirm that Poco X3 will indeed be the first smartphone to be powered by the newly announced Snapdragon 732G chipset. The variant shown off in the video includes 6GB RAM and 64GB storage, however, we can expect up to 8GB RAM and up to 256GB storage options.

The device is also confirmed to include a huge 5,160mAh battery with 33W charging support. It enables the Poco X3 to go from 0% to 100% in about 65 minutes, as per the company. 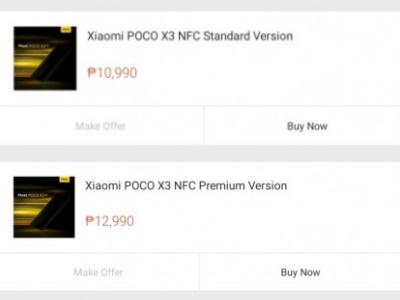 German automaker Porsche introduced a new variant of its best-selling electric car Taycan at a significantly lower price for the U.S. market in the...
Read more