There’s no other manufacturer like Realme that has aced the budget smartphone space. Ever since the lockdown ended, Realme has kept coming up with a host of pocket-friendly smartphones with varying options. Realme nails the design part along with the features that matter to budget smartphone buyers. It also loves giving choices and hence, has decided to expand the C series with more variants. Yes, in classic Realme style, you now have more options in a particular series. Also Read – Realme Buds Classic India launch on August 18: Check features and other details

With the C12 and C15, Realme wants to appeal to those buyers who don’t want to get into the Narzo series. Hence, you get features that matter to the common man, i.e. a massive battery and more cameras. The C12 sits in the sweet middle spot and with a price of Rs 8,999, it competes with the Redmi 8A and Redmi 8. Curious to see how it fares for what its worth, I picked up the Realme C12 as my daily phone for a few days and here are my thoughts. Also Read – Realme 6i Review: An affordable, performance-oriented mid-range device done right

For the last two years, Realme has stuck to the same design cues for all its phones across different prices. This changes with the C series as Realme finally comes up with fresh designs. The squarish camera design from the C11 makes it to the C12, albeit with an extra camera lens. Since you are paying more, you get a capacitive fingerprint sensor at the back for more secure verification. Also Read – Realme Narzo 10 Review: Expanding options in the budget segment

The matte grippy finish isn’t new though, but Realme has refreshed the patterns to make it different from the older model. Because of this design, the C12 resists smudges and is comfortable to hold despite its vast proportions. Oh yes, this Realme C12 weighs 209 grams due to its massive 6000mAh battery (more on that later). I wish the matte texture extended to the sides in a bid to improve the in-hand comfort. That said, I am asking too much from a sub-Rs 10,000 smartphone.

To the front, you get a massive 6.5-inch display with narrow bezels and a reasonably thick chin. The buttons are clicky and easy to reach while using single-handedly. However, Realme opted to cut costs with the micro USB port on the C12. At a time when an equally priced Redmi smartphone features a USB-C port, Realme’s decision to go for the old micro-USB port is unreasonable. USB-C is popular in today’s world, and it should have been here on the C12.

On the whole, though, there’s not enough to complain about the C12’s design and build. The matte plastic body with the grippy texture feels great in-hand. The C12 is one of the coolest looking phones in its price segment. For a smartphone costing Rs 9,000, the C12 already wins hearts with its massive 6.5-inch display. Consumers love big displays regardless of the quality or the chip inside, and Realme has delivered where it matters. Whether you are watching YouTube videos, movies, photos, social media or playing Candy Crush, this display adds to the experience.

It is a good quality LCD screen with high brightness levels and vibrant colors. Sadly, the HD+ resolution means you don’t get to see the sharpest of visuals. Maybe a Full HD+ display on the C12 could be a better option for users. Additionally, sunlight legibility suffers too and you often need to head for shades to see the contents.

In the sub-Rs 10,000 category, it is MediaTek that rules the chipset game. The C12 relies on the Helio G35 similar to the C11, paired with 3GB LPDDR4X RAM and 32GB onboard storage. You can expand the storage up to 256GB with a micro SD card and the best part is that it gets its dedicated slot along with the dual SIM slots.

On paper, this combination of chip, RAM and storage should do just fine for daily usage. In reality, it is not the same. Android 10 is a demanding operating system and on the Realme C12, it wears the Realme UI skin. The interface looks clean and swiping between menus is fast. However, try opening apps and switching between a few of them. This is where the C12 falls apart with its Helio G35 chip.

In my usage, I encountered delays while opening basic apps, occasional stutters and freezes. The 3GB RAM is barely enough to focus on just one app at a time. For example, I open YouTube and I have to wait for a few seconds for anything I do inside the app. Maybe Realme needs to come up with an update full of optimization and fixes. That said, it is not all bad. Use it gently and patiently, and the Realme C12 copes up with the daily tasks. I played Candy Crush, Temple Run and a few more basic games with absolute ease. The UI is clean and I did not see any third-party pre-loaded apps, except for Facebook and Amazon apps (Kudos to Realme!). Realme UI is easy to navigate, and its colorful overlay appeals highly. The web browser keeps throwing up news notifications often, but you can disable it from the settings. I kept it enabled for the entire time and never did I see a vulgar advertisement.

One of the big changes with Realme UI here is the inclusion of the stock Google Phone, Contacts and Messages apps. Realme is also preloading the C12 with some additional Google apps such as Google One, Podcasts, Pay, News, Files, Keep Notes and Calendar.

Do note that the Realme C12 only supports 2.4GHz Wi-Fi format. Hence, speeds on Wi-Fi networks will be limited and you will notice it while downloading files or apps. Call quality via Jio’s LTE network was clear and with VoWiFi enabled, call quality stays free from occasional jitters. The single loudspeaker is, well, loud and while it’s not best of its kind, it does its job fairly well. Moreover, there’s always the 3.5mm headphone jack to rely on if you seek privacy for your movies.

Realme tunes its cameras well, and on the C12, it’s no different. Unlike the C11, you get three cameras on the back of the C12. The primary camera uses a 13-megapixel sensor with an aperture of f/2.2. A 2-megapixel macro camera accompanies this camera along with a focal length of 4cm. The third camera is what Realme calls the B&W camera. Essentially, this is a monochromatic camera used for depth detection. The front camera is a 5-megapixel sensor meant for selfies and video calls. Realistically speaking, the expectations for a budget smartphone camera are usually low. In this instance, however, I was left surprised. Give the main camera a well-lit situation to play with and it impresses highly. Photos are plenty sharp with vibrant colors and decent white balance. Exposure is always towards the brighter side to make photos look cheerful. Realme’s touch of enhanced color saturation seems overdone but for most customers, it works just right. You won’t find the sharpness as you pixel peep but for social media needs, this primary camera is plenty good.

Even in low light situations, it does not disappoint. The primary camera starts struggling for details and it softens the image to keep the grains away. The struggle is real for night photos, but you can switch on the Night Mode to get back those colors and some details.

The macro camera produces usable photos as long as you give it a lot of light and the correct focal distance. I was able to get useful macros in daylight, and I had to keep in mind the 4cm focal length to get it sharp. The third camera did exceptionally well with depth detection, and the camera algorithms managed proper edge detection. 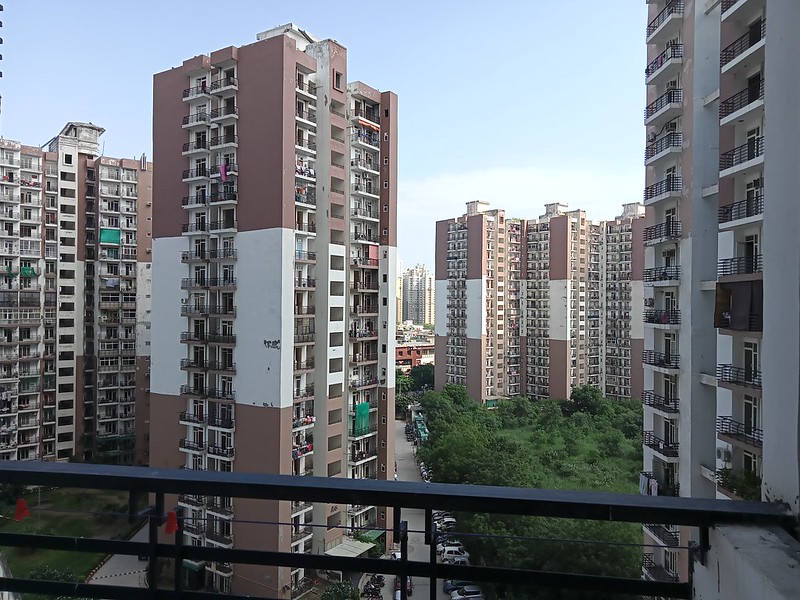 Switch to the front camera, and the Realme C12 keeps impressing. Selfies with the 5-megapixel camera possess vibrant colors and adequate sharpness. Portrait mode works nicely on selfies too, with sound subject separation. The details aren’t that good though, and as light levels fall, you will start seeing softer photos. The C12 tends to brighten up dark skin tones, and that is something I don’t mind, given my dusky complexion.

The biggest highlight on the Realme C12 is its battery. At 6000mAh, this is one of the bigger smartphone batteries I have seen in 2020. Hence, as expected, two-day battery life is given even when you are showing no mercy to the phone. However, a big battery also requires significant software optimisations not to sip battery like a blood-sucking mosquito. The C12 in my light usage patterns managed to last a full day, and the first half of the next day.

Mind you, my light usage includes social media browsing for at least 2.5 hours a day, 3 hours of music streaming, lots of calls and texting. I was expecting the Realme C12 to last a total of two days with this usage pattern given the HD display and the weak Helio G35 chipset. However, it seems that Realme needs to optimize the software better to get more life out of a single charge.

Sadly, this 6000mAh battery has to fill up a lot of itself and with the bundled 10W charger, it takes forever for a full charge from 10 per cent on an average. I had to leave it overnight on charge for topping the battery. Maybe an 18W fast-charging system could have helped fill it up faster.

Verdict: Should you buy the Realme C12? The Realme C12 comes in a space where you don’t see may new phones anymore. If you look at the alternatives, all you have are the older generation models from Realme and Xiaomi for similar prices. Hence, for bringing a fresh proposition to this space, the Realme C12 deserves credit. Compared to the Redmi 8 and Samsung M01, the C12 is new and feels exciting. It looks great, is built nicely and has reasonably good cameras for its price.

However, the Realme C12 sits inside a price bracket that offers notable upgrades for not a lot of money. Most of the issues with the C12 (slow charging, sub-par selfie camera) are addressed with the C15. But you also have the Realme Narzo 10A at a similar price with a notably better chipset and a nicer 48-megapixel camera. Hence, inside Realme’s own lineup, the confusion is exceptionally high. Let me frame it this way: if your budget is limited to Rs 9,000, the C12 is the only “new” 2020 smartphone you can buy. If you can stretch it to Rs 10,000, the Narzo 10A is a way better option with quality upgrades in cameras and performance. You can also choose the Redmi 9 Prime for its cameras, Full HD+ display and design. The Motorola G8 Power Lite also comes close with its stock Android interface and good camera performance.

Through various means of technological innovations, we have seen organizations and even companies like Microsoft make gaming easier for the disabled community. Well now,...
Read more
News

From in-display fingerprint sensors to advanced facial recognition technology, we have seen companies implement various forms of biometric authentication tech into phones over the...
Read more