Redmi K30S Tipped to Be a Rebranded Mi 10T; Launching in China Soon

Xiaomi is looking to add a new smartphone to its popular Redmi K30 lineup. It already includes the mid-range 5G-enabled Redmi K30, the flagship Redmi K30 Pro with the Snapdragon 865 SoC, and the Redmi K30 Ultra with the Dimensity 1000+ SoC under the hood. This new smartphone is rumored to be the Redmi K30S, which will most likely be a rebranded Mi 10T that recently launched in India.

Now, you may wonder, how do we know that Redmi K30S will be a rebranded Mi 10T for the China market? First, in a now-deleted Weibo post, China Mobile tweeted out an image of the Mi 10T with the caption referring to it as the Redmi K30S. Screenshots of this post are now doing rounds on the Internet and you can check it out right here:

In addition, what is believed to be the Redmi K30S with model number M2007J3SC has now appeared on China’s TENAA. It reveals not only the design but also some of the key specs of the upcoming device. One look at the design (image below) is enough to tell that it could be a rebadged version of the Mi 10T. 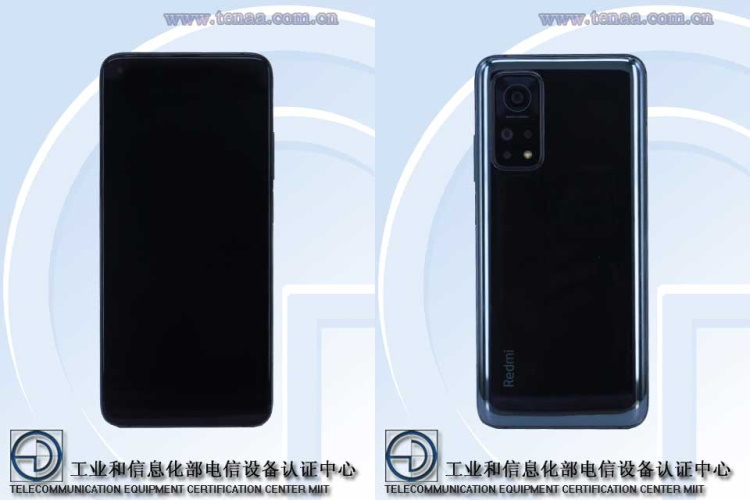 As for the specifications, the TENAA listing suggests that the smartphone will sport a 6.67-inch full-HD+ LTPS display with a 20:9 aspect ratio and 2400 x 1080-pixel resolution. It is powered by an octa-core chipset clocked at 2.84GHz, coupled with up to 12GB of RAM and up to 512GB of storage. This appears to be the Snapdragon 865 and Xiaomi will be offering a high-end 12GB+512GB variant (not available globally) in China.

The display includes a punch-hole cutout, as you can see in the image above. It will be a 20MP selfie sensor if this smartphone is truly a Mi 10T rebrand. The rectangular camera module also looks the same. The TENAA listing reveals that you have a 64MP primary sensor on the rear, but the other two cameras are unknown. They will be a 13MP ultra-wide and 5MP macro sensor, as per the Mi 10T’s specs sheet.

Finally, the listing also reveals that Redmi K30S will come equipped with a massive 5,000mAh battery. The TENAA listing has no information on the charging speed but a recent 3C listing for a phone with the same model number revealed that it will support 33W fast-charging – the same as the Mi 10T series.