Spotify is Testing Stories for Playlists

After Snapchat, Instagram, Twitter, and a bunch of other platforms, Spotify is testing stories. The company is currently testing the feature on select playlists including the Christmas Hits playlist and tear drop playlist. Spotify’s take on stories shows you video clips from featured artists on the playlist. For instance, the stories on the Christmas Hits playlist focuses on artists revealing their Christmas experiences along with a couple of behind the scenes tales.

If you’re part of the public testing of Spotify stories, you will see a story bubble on select playlists when you open them from the mobile app of Spotify available on Android and iOS. Tapping on the story icon takes you to the story interface. You can then tap left or right to move forward or backward between the available stories. 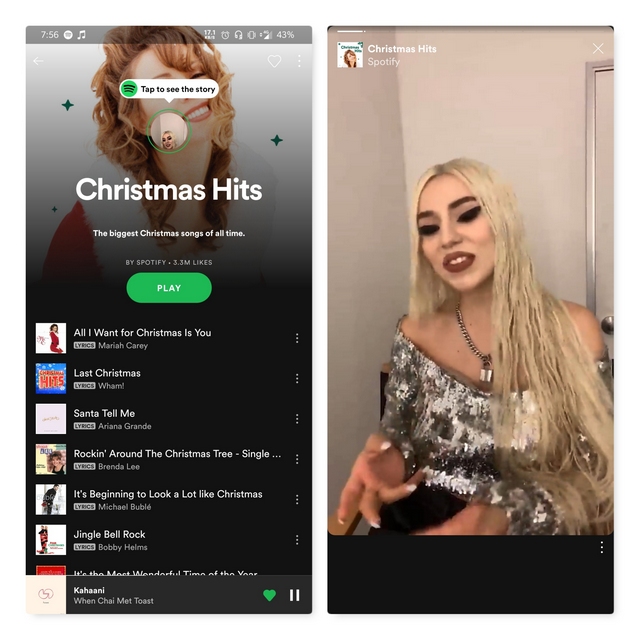 In a statement to Engadget, Spotify officially confirmed the test. “At Spotify, we routinely conduct a number of tests in an effort to improve our user experience. Some of those tests end up paving the path for our broader user experience and others serve only as an important learning. We have no further news to share on future plans at this time,” a Spotify spokesperson told Engadget.

While the idea of integrating stories could help improve user retention in the platform, I would have personally loved to have the feature suggest playlists based on my preferences or even artists’ suggestions rather than short video clips detailing their process. It would’ve also been convenient to have stories where users could share songs with their followers within Spotify without relying on third-party social media platforms. Since the feature is not finalized just yet, we could expect the company to fine-tune the purpose of stories based on early user feedback.