We have hearing rumors of Vivo’s plans to replace its current Android skin, FunTouch OS 11, with OriginOS for the past couple of months. The Chinese giant has confirmed today that OriginOS will be unveiled on 18th November in Shenzhen, China. Vivo will take the wraps off this new Android skin a day ahead of VDC 2020 (Vivo Developers Conference).

The company has set up a new Weibo handle for OriginOS and confirmed the launch date via an official Weibo post. Vivo is set to introduce us to a ‘brave new world,’ reads the caption, and the teaser poster (below) does not reveal anything about the new OS. 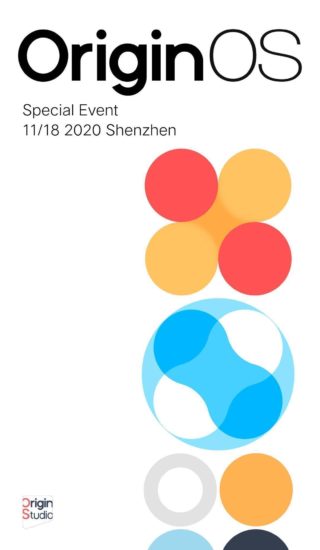 The OriginOS logo (in the header image above) is the same as the one we saw in leaks recently. The leak suggested that Vivo will offer users a quick switch to let them jump between OriginOS and stock Android UI. This begs us to question whether OriginOS will be based on Android or not. Vivo is yet to offer any confirmation for the same.

We currently have no information on the UI and features in OriginOS. Vivo is surely going to further polish the design, possibly taking a page from FunTouchOS 11 (found aboard the Vivo V20 in India). It was a major upgrade over any previous FunTouch OS skin.

Vivo X60 will most likely be the first smartphone to be powered by OriginOS. It will be the first-ever device to come equipped with the latest 5nm Exynos 1080 chipset under the hood. So, stay tuned as we will bring you a first look at OriginOS and its feature set in the coming week. This new UI experience will replace FunTouch OS on all previous-gen Vivo smartphone, as per rumors.