A couple of months ago, OnePlus launched the Nord as its premium midrange option in the sub-Rs 30,000 category. It got most of the things right and got many buyers interested in the rather neglected price band of Rs 20,000-Rs 30,000. It had a few shortcomings but it just good enough for many. I personally assumed that it would take a year for someone else to better this proposition. Well, Vivo is here with the V20 Pro and is rather putting a smug face. Also Read – Vivo V20 Pro 5G launched in India at Rs 29,990: 7 key features to note

The Vivo V20 Pro is everything the OnePlus Nord is and then some. In fact, on paper, it is as capable as Nord in terms of performance. Dig deeper and you will see the V20 Pro coming out as better of the two in some areas. It still has some weak areas but in my time with the V20 Pro, I have no doubts about this one being the best all-rounder smartphone for most of you. At Rs 29,990, it is the most rounded package. Also Read – Vivo V20 Pro prices revealed ahead of India launch, competes with OnePlus Nord

The Vivo V20 Pro is part of the V20 series devices and retains the same look and feel as the V20 we reviewed a few months ago. Vivo’s universal design language for its 2020 smartphones is eye-catchy, especially with its bold rectangular camera hump. The entirety of the rear of this phone is one endless beautiful canvas that you can look at tirelessly. I mean, there’s no phone in 2020 I had rather look at the way I did at the V20 Pro. Apologies to all onlookers who considered me crazy.

If you are buying this phone, go for the Sunset Melody color variant. With the matte glass, this color is simply astounding to look at. At various angles, the color changes and that made my boring office hours a bit interesting. The shiny frame helps to an extent in boosting the appeal. I also found the matte rear to be smudge-resistant, which is a great deal for the average oily Indian hands. I am still not a fan of weird branding text on camera humps and the ones on the V20 Pro don’t change my opinion. While the rear is full of drama, the bland front is in stark contrast. There’s a conventional bathtub-style notch that holds the front cameras. I would prefer a OnePlus Nord-esque pill-shaped cutout for the cameras instead of the older style notch. It makes the V20 Pro look old from the front, even with those fairly slim bezels. The combination of plastic and glass makes the phone fairly light at 170 grams – a blessing for the hands. The colors are vibrant while the sharpness is great. I watched YouTube videos, social media videos, and movies on Prime Video, and the experience was good. The notch does not get in the view as much as the iPhone’s notch and gels well with most apps. The fingerprint sensor is fast but the detection rate needs some improvement.

One of the headline-grabbing features on the V20 Pro is the Snapdragon 765G chipset. This is the same chip that the OnePlus Nord uses and hasn’t given us chaps any complaints regarding the performance credentials. Hence, for the V20 Pro, I had high expectations, and over a period of 10 days, I was not disappointed. The 765G is a very capable chip and it can handle gaming with ease. Everyone’s favorite game benchmark PUBG Mobile isn’t available anymore and hence, I resorted to the current popular title that’s got everybody’s attention, i.e. Genshin Impact. The game defaulted to low graphics at launch but I was able to get a good gameplay experience at High settings with 60 fps. The jitters were noticeable. After 30-minutes of gameplay on an average, the phone remained cooler to touch.

With 8GB RAM onboard, the V20 Pro can handle a good load of multitasking. I was able to keep all of my office-required apps in memory for hours. I copied text from Outlook, pasted in Word, shared a screenshot on Teams, and went through a few emails from Gmail at the same time. Social media apps had no trouble in loading content as well.

My only issue in the performance section is related to the UI. Vivo launches the phone with Android 11 based FunTouch OS 11 but my review sample came loaded with Android 10 with the newer FunTouch UI. Vivo’s FunTouch UI is more cheerful than ever with its graphic icons and neatly laid menus. That said, the UI is far from organized and there are elements that might bother those who care for details. More than the interface layout, it is the amount of pre-loaded third-party apps as well as Vivo’s own apps. The overload of so many apps appears messy but if you are at ease with all those apps filling up your app menu, that shouldn’t be bothersome. There’s a lot to customize here but the Theme Store only offers sub-par themes at prices.

The interface is truly messy at its best and I hope Vivo brings the freshened up OriginOS experience to the V20 Pro. Currently, the OnePlus Nord with its OxygenOS experience is still my pick for the best software user experience.

The audio out of the single loudspeaker is decent but I would prefer a stereo speaker setup, given the premium Vivo is asking for this phone. I found the call quality over the earpiece good and over Jio’s network, I did not face any noticeable network drops.

The V20 Pro is all about its cameras and it excels over all its rivals, especially over what the Nord manages. The rear camera setup consists of a 64-megapixel main sensor that’s assisted by an 8-megapixel ultra-wide camera and a 2-megapixel depth camera. These are good numbers on paper and in real-world usage, the experience is “okayish” (for the lack of a better word). In daylight, the V20 Pro takes good looking photos. The dynamic range is decent while the sharpness in the Auto mode is fine for social media. It gets the details right and the colors aren’t overly saturated. There are struggles with the exposure at times and in shadows, I noticed grains. I figure this is mainly due to the higher exposure the camera sticks to. I personally like my photos natural but for Vivo’s target audience, bright photos take priority over details and color accuracy. If it is good enough for you, then Vivo must be doing things the right way.

The same issue stands for the wide-angle camera. There’s a shift in the color science and the 8-megapixel sensor lacks the details that its 64-megapixel sibling can gain. The wide-angle photos appear dull at times and the camera always tries to bump up the ISO or exposure to make the photos look brighter. You can even get macro photos with the wide-angle camera and the outcome is certainly better than those 2-megapixel macro sensors. The photos are actually useable with good colors and ample details.

As light levels fall, Vivo’s AI algorithms try to amp up the brightness levels and that eventually results in more grains. At night, I found the camera great for what it costs. The regular mode deals with the exposures well and keeps the colors intact. It messes up extremely bright light sources, eventually affecting the rest of the frame. The Night mode deals with brighter exposures better and you get great looking photos. Overall, I like the camera performance more at night over day. 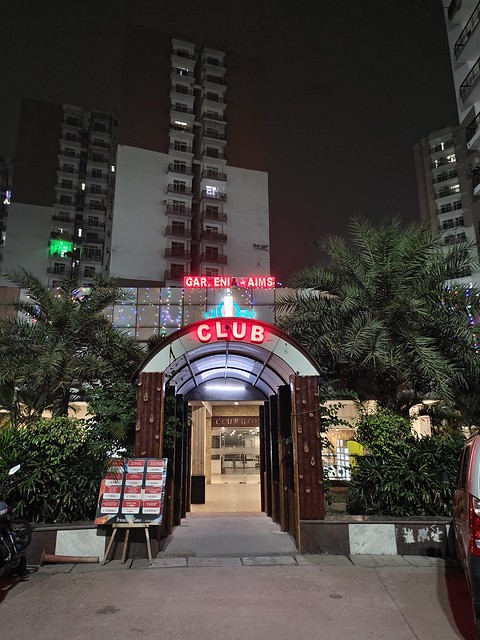 Selfies is where the V20 Pro shines. With its 44-megapixel main camera, the V20 Pro left me impressed with the quality of selfies. Not only are the photos highly detailed but the rest of the quality is amazing. The skin tones are done nicely without the beauty effects while the background is managed exceptionally well. Whatever the light conditions are, the photos appear bright. And everyone loves bright-looking selfies (I assume).

The 8-megapixel ultra-wide camera loses out on the details slightly but maintains the same color science as well as the impressive background exposure management. The portrait mode cutouts are decent but they are not as good as what you get on the iPhone 12. The blurring effect seems abrupt and parts of my hair are often cutout. Vivo can bring improvements here with OTA updates. The Vivo V20 Pro uses a standard affair 4000mAh battery and as expected, it makes it a one-day phone. Under my moderate usage, which included dealing with office work on office apps, playing games for half-an-hour on an average, browsing social media for two hours on an average per day, some photo sessions, and making lots of calls, the V20 Pro ended the day everyday around 30 percent. I believe little tweaks to the software could make the phone last longer, given that the Snapdragon 765G is a power-efficient chip.

Charging the phone isn’t a hassle as Vivo bundles a 33W fast charger in the box. It took me an hour to fill up the battery from 30 percent, which is on par with most phones you can buy at this price range. I am still spoilt by Oppo and Realme’s 65W charging solutions that fill up the battery in under 30 minutes. To sum it up, I like the Vivo V20 Pro a lot. Not only does it look ravishing with all its sensuous hues at the back, but it is a fast phone that has great selfie cameras. And that’s what the V20 Pro is all about: selfies, looks, and raw performance. Most people I interact with seek these aforementioned qualities as important and that makes it the most well-rounded smartphone you can buy (provided you agree with the masses).

That said, the V20 Pro has its fair share of flaws. The user experience is far from decent and I really hope that Vivo brings its new Origin OS interface to the V20 Pro soon. The rear cameras are almost on par with the ones from the OnePlus Nord. The night camera performance is good and I would like to see Vivo doing the same for daylight conditions. I would also like to see Vivo working on battery optimization as there’s room for improvement.

As a tech enthusiast, I would pick the OnePlus Nord over the V20 Pro. As a brand-conscious buyer, it is the Nord that gets my vote. As a performance seeker, my hand still reaches for the Nord. However, if I want a phone with great front cameras and an eyeball-grabbing blingy design, it is the Vivo V20 Pro that’s my pick.

Signal and other WhatsApp alternatives are experiencing a large number of downloads after WhatsApp revised its...
Read more
News