The theme pack comes in both light and dark variants, both having regular (with the sidebar slightly transparent in some applications) and solid versions.

There’s also an optional Plank dock theme for those that want to achieve an even closer look to macOS Big Sur. As a side note, if you use Ubuntu and want to disable Ubuntu Dock so you can use Plank dock instead, see this article.

The same designer / developer has also created a WhiteSur icon theme that mimics the macOS Big Sur icon theme for Linux desktops. The icon theme is also available in light and dark variants.

I realize not everyone likes the look of macOS, or to make their Linux desktop look like it, so this theme isn’t for everyone. But you have to admit it’s pretty cool that this is possible. And believe it or not, there are quite a few people that want to mimic the Mac look on Linux, and this article is for them.

If you prefer Adwaita or Yaru themes, but you want to spice them up a bit, see:

1. With Nvidia graphics (it definitely happens with proprietary drivers, I’m not sure if it also happens with Nouveau), the Nautilus sidebar doesn’t refresh after hovering over the items, making it look broken: 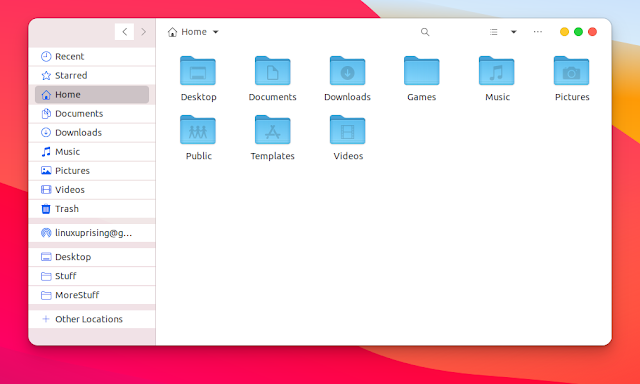 To work around this issue, the theme developer has created solid theme alternatives (e.g. WhiteSur-light-solid and WhiteSur-dark-solit), which don’t have this issue.

Basically, any Gtk theme that is not in the common-themes snap will have this problem; theming support is under development for snaps, and until it’s finished this issue will continue to persist.

A work-around for this exists though. Install Gnome Software:

I explained this, and other tweaks, in my Top Things To Do After Installing Ubuntu 20.04 Focal Fossa To Make The Most Of It article.

The WhiteSure Gtk download button from above has the themes already compiled (includes the Gnome Shell and Plank themes). If you’d like to download the latest WhiteSur Gtk source from Git and build it yourself, see the theme GitHub page.

To install the theme:

You may also like: How To Use A Different GTK 3 Theme For Specific Applications

How to Install AppImage in Linux

AppImage is a self-contained format for packaging applications. It is the universal software package format compatible with various Linux distribution. In the traditional system...
Read more
Linux

A Hostname is an unique alphanumeric label assigned to a Linux system in order to identify it on the network. It can also contain...
Read more

How To Delete WhatsApp Group: Exit And Delete A Group